skip to main | skip to sidebar

Oh my. My queue and work basket overfloweth. I am actually in the mood for making gifts, and am trying to capitalize on that urge. As it is for most everyone, money is tight, but I actually have many folks in my life whom I deem knit-worthy and I like them to know I think of them. That being said, I am nearly done with mitts started last year (the year of the fingerless mitt -- arg!) for my sis-in-law, 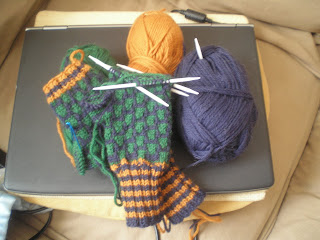 and have to re-start some made for my mom-in-law. I could not for the life of me figure out why the mitts I had nearly completed for her last year -- in the amazingly fantastic Acker's Acres Bunny Blend, bought in Maine -- were so darned tight. I had knit these mitts (my own Smocked Gauntlets -- see sidebar) 3 other times with no problem. Then I discovered that what I thought were size 3 dpns were 2s. Doh. So, they will be for Rachel, whenever I get to the finishing. I am debating using some lovely hand-spun for MIL instead, and perhaps a different pattern this time.
I am also working ponchos for my "nieces" in Kauni EQ on size 8s to make them nice and airy. The girls and their brother live in the Dominican Republic, which makes for difficult gift knitting! My cousin (their mother -- yes, that technically makes the kids my cousins, too, but we don't play that way...lol) has told me that the oldest girl still LOVES the poncho I crocheted her years ago before I knew better about yarn and anything, and that they could both use something lightweight for the cool mornings before school. And what little girl can resist a rainbow? 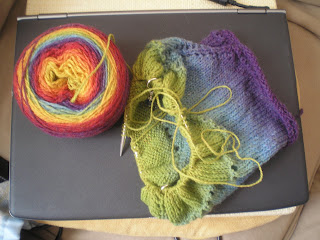 I've adopted the basic guidelines for the Very Harlot poncho and am throwing a few eyelet rows in for interest.
For my nephew, a Pokemon fan, I'll be picking up the hook again to make him a Pikachu doll, and am nearly done with a Mew for Rachel. I messed up the head, as it should have been in the round, but it will still work. 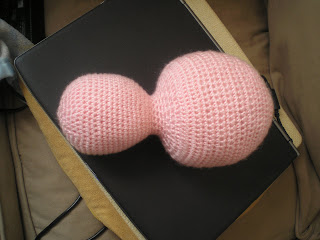 A scarf for hubby is in the works and nearly half done. I am making him the simple One Row Scarf (again from the Yarn Harlot). (Sorry -- no pic, but it is a very pretty green.) This poor scarf was started and ripped 4 times (in luscious Pear Tree merino) before settling on this design. I had really wanted to make him something super special, but I have little patience for scarves and needed this to be something completely mindless and painless so I could knit it at karate with out a chart to fuss with. My goal is to get this sucker done before the first real snow fall.

Then there are the hats. I have some gorgeous Kathmandu Queensland Aran in a tweedy dark charcoal to make a Gretel for my little sis (I want another one of these for myself!) and I am searching for a pattern to make another niece a hat and mitten set. I want them to have horses on them. (Off to Ravelry!!) I am also going to get working on new hats for my kiddos, a purple Cheetah Beret for Rachel and a hat of my own design for Jacob -- a Bakugan hat. Anyone with a school aged boy has probably heard of these toys, impossible to find in stores right now, and the latest obsession. I have taken one of Jacob's favorite "characters" (Fear Ripper) and charted out a reasonable facsimile, tested a swatch and am nearly good to go. I just need to pop into the yarn shop and pick up the preferred yarn in the right colors -- Debbie Bliss Rialto (nice and soft for the boy) -- and get moving. If it works out well, my young nephew here in the states will get one as well.
In the meantime, I whipped up a few slippers for the kids. They were just big socks, really, and took very little time at all. 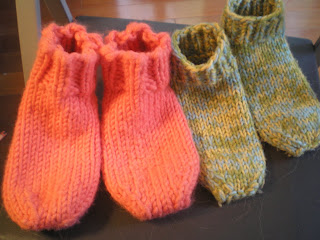 Stashbusting for both, I used 3 strands of Knitpicks Wool of the Andes on size 10 needles for Jacob's (but am wishing I had used 2 strands of blue with the yellow and left out the sickly green) and for Rachel I used just over 2 balls of Patons Bella on US 10 1/2 dpns. Both were a cast-on of 24 stitches and then just a standard heel-flap sock from there. Nice, thick, and squishy.
In closing, I was going to say "that's it" but, well, this just may be a bit of an ambitious list, no? Oh well, no pressure. Christmas is only 35 days away. (And let's not forget that I do have to work. gulp.)
Posted by yarnophiliac at 8:47 AM 9 comments:

Although I don't often discuss them here, my home is rather happily and warmly filled with company of the soft and furry kind. As I type, I am flanked on either side by my sleeping dogs, and two -- nope, make that three -- of the four family cats are lounging about in sight. The kitties love to "help" with my knitting by keeping my lap warm while I work at night or "guarding" the finished bits of sweater that they may find lying about by, well, lying about on them.
My darling BooBoo, the eldest of our brood, but who will forever be "my baby" as I bottle-fed and weaned him myself, has an interesting quirk. He loves shiny things. I have learned to hide my earrings and other bits of portable sparklies when removed as he has been known to steal these from my nightstand and bring them to the smooth kitchen floor for some hockey-type fun. We found quite an array under the refrigerator when we moved from our last house.
And then there is his protege, Bella, who once, as a 5 month old kitten, bit the earring straight off my ear and swallowed it, earning her a $700 trip to the ER to scope it out.
Given their history, it is a complete wonder that I sat dumbfounded staring at the blocking pieces of my Drops jacket, pins all scattered and askew.
The had been perfectly pinned. 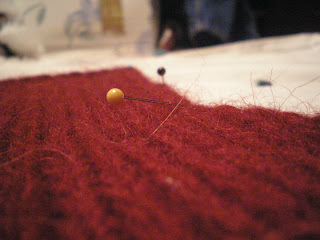 Not an extra pin in site. 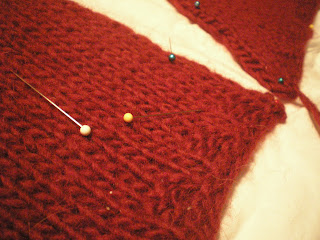 BOOBOO. From now on, the kitties get locked out of the room when anything is blocking.
Posted by yarnophiliac at 10:38 AM 3 comments:

Although I have been silent, I have been productive. Very productive. In fact, I have two sweaters to show you!
The first is from Cecily Glowick and labeled in Cast On Magazine in the Nov 2007-Jan 2008 issue as the Irresistable Sweater, but on Ravelry is listed as Cable and Lace Pullover. No matter what it is called, the sweater is fantastic. It was a super quick knit, too! I worked this one up in 15 days. 15! I used a yarn, Jo Sharp Silk Road Ultra (mmmm...merino silky goodness. I am obsessed with this combo), that knit up to a larger gauge and didn't want to drop needle sizes and sacrifice the fabric quality, so I did a little math (yes, me and math -- who woulda thunk it?) and knit the smallest size in the round, eliminating the stitches allowed by the pattern for seaming. As I always do, I also added a few inches in the body for length. The only other alteration I made was to drop to an even lower needle size for the final few rows of the neckline to bring it in more, as I am still contemplating the addition of buttons. Without, I can still wear the sweater very comfortably (with a top underneath, which is a given anyway, considering the openness of the lace in the body. I'm not that daring, nor would anyone want me to be! I do wish I had made the body a tad less fitting, but am going to block it a bit more aggressively with the next washing. Or do some sit-ups. 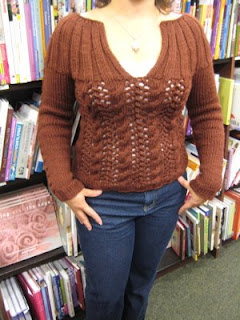 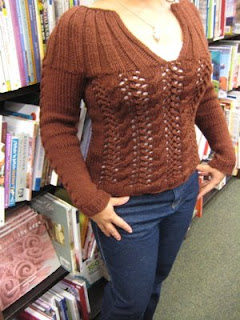 The other sweater, also knit in an insanely short amount of time (for me, anyway) being done in just 20 days, was the ever popular Drops Jacket #103-1. I have worn this non-stop since I have knit it as my fall jacket, as it has been cool, but not cold, here in the northeast thus far this fall. I pushed this up in the queue, even tho I have swatched (and shopped) for a few other sweaters, as I really, really wanted to get to wear it for the fall. Taking the lead from my lovely friend Jackie, I worked this one up in a lovely red Lopi purchased at the JCA Warehouse sale (I got the Silkroad here, too) for pennies on the skein. I think the whole sweater cost me about $12, before buttons. This sweater had no business fitting me at all, frankly, as I was a very naughty knitter and didn't swatch a bit with a yarn I knew would not get gauge. I knew Jackie had come in between the worsted gauge and the bulky gauge for her jacket, and blocked pretty aggressively, so I went up a needle size and knit a bigger size in the pattern (Jackie and I have somewhat similar size requirements up top, although I'm sure my butt would eclipse hers!), figureing if it was too big, I could felt it down a bit -- not a bad thing for a jacket. Well, no need. The darn thing fits me freakishly well. The pictures are terrible, but I did once again add length and stuck with the 3/4 length sleeves, as that is part of the styling I fell for in the original. I picked up buttons for the sweater from Jenny the Potter while at Rhinebeck and they are just perfect. (She was a doll, too!) I finally got the hang of seaming, I do believe, and I was glad to try it out on this project (although I did knit the sleeves in the round, to make them go along quicker) and I am glad for it. I have Jaali in my immediate queue and really want the seams on that one to look just right. 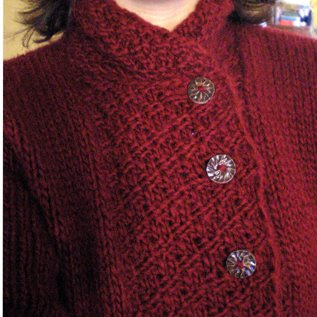 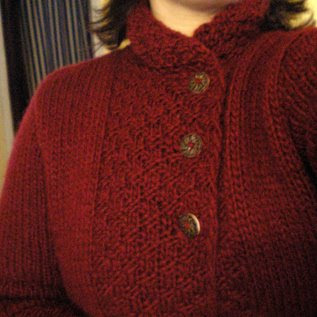 I think that is all for today, but i have so many more things to tell you! I may space them out over the next few days, but no promises. :)
Posted by yarnophiliac at 8:18 AM 9 comments:

Promote Your Page Too